Based on 3 reviews Write a review

What is the difference between Grade A handles and Grade B handles?

This is a very interesting and intriguing handle! At 12 inches it is meant for a special kind of hatchet head! The kind of hatchet who's user lives by the motto "It's not the size of the axe that counts....it's how you swing it!" If you have that an hatchet that size odds are you have been looking for the right handle to fit it on! Well look no further! You can't go wrong with this slender, yet mighty, piece of air dried American hickory!

If you really want to add some character to your new hang pick up a walnut wedge!

You can also grab an extra poplar wedge if you want too!

All axes come with the appropriate wedge!

Ordered this for a tiny lil hatchet project for a friend. It turned out great!! She now has a great tool that she can use for the rest of her life. 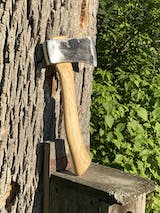 I mounted this a 12 inch handle on a new, never used pre- 1882 Mann Axe 1.5-pound hatchet. This is one I found brand new with proper Mann Markings and was made prior to machine forging with two kinds of metal and the Early axes were made from two pieces of metal. The poll or head of an axe was formed by folding a bar of heated wrought iron, which also creates an eye. High carbon steel was used for the bit or cutting edge. Two methods existed for attaching a bit to the iron scarf. An early "inlay" method inserted a bit into a V-shaped cleft or "lip" in the scarf, welded in a forge, and then drawn using a trip hammer. The overlay method – patented by Harvey Mann in 1862 (no. 35,480) – welded steel on the outside of the scarf, which exposed more steel on the cutting edge. The two pieces of metal are clearly visible with the weld and some of the original factory paint is visible.

I'm a wood carver that uses my hatchet quite a bit. Hard to find 12" hatchet handles anymore. I bought a couple and very happy with the quality. I'm teaching a couple young men now and need more, could actually make our own, but need to spend our time on our bowls and spoons.

I have a Sater Super Banko hatchet that I have had since I was a kid and at 1.125# it is hard to find a handle for. Had to do a little trimming with a spokeshave (as expected) and it is now a perfect fit. Straight grain handle with no runout. As I work my way through restoring my Father's and Grandfather's axes I have 3 more handles to buy and I plan to buy them all from Whiskey River.

I am an axe maker but I dont like to make my own handles. And I made a very small hatchet and couldn't find the right handle for this little guy. Well I found it and it was a perfect fit had beautiful grain structure!!! I had purchased 3 different handles all from different companies and the quality of this handle and the fit was incredible. Out of the three handles I bought this was hands down by far better than any other handle i have purchased. Im a life long customer now!!!!